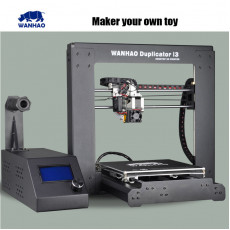 When it comes to affordable 3D printing, now is a better time than ever to consider purchasing your first machine. As each month passes, it seems as though the average price for a basic desktop machine drops in a linear fashion. Certainly a floor will eventually be struck, but for now, if you are in the market for a new 3D printer, you might as well enjoy the ride.

One company, based in Miami Florida, called Wanhao USA, has put out several affordable yet robust 3D printers in the past year or so, but this week they announced the commencement of pre-orders for their most affordable machine yet, the Duplicator I3. Most of the time when a new sub-$400 3D printer is introduced to the market, it’s not typically the highest quality machine. After all, many individuals spending under $400 for a 3D printer are beginners who likely do not require anything too dazzling. With that said, the Duplicator I3 seems to go against the grain, starting with its sturdy, all-steal, black frame. The machine itself, based on the the RepRap Prusa i3 model is meant as an entry-level 3D printer which packs a punch. The company recommends it for skilled beginners, home prototypers, and all-around makers. Below you will find some of the general specifications for the Duplicator I3:

If this isn’t enough to get you excited about this new 3D printer, then maybe some of the added features will do the trick. The extruder is of the utmost quality; an MK10 with a steel x-carriage. This is the same extruder used on Wanhao’s Duplicator 4S and Duplicator 4X machines, only in the single extrusion variety. The printer also will come with its own electronics housing and custom filament holder.

As with all Wanhao 3D printers, the company fully backs the Duplicator I3 with a 1 year full factory warranty which includes free part replacements and repairs. From now until June 1, the price will remain at $375 for all pre-orders, after which time the price is expected to rise. The first units are to ship within weeks.

Let us know if you have ordered this machine or have used any of Wanhao USA’s other products. We would love to hear your feedback. Discuss in the Wanhao Duplicator I3 forum thread on 3DPB.com. Check out a video of the machine in action below and tell us what you think: